Level: Anatomy of a Launch

Starting a Conversation on Product Hunt, Medium and Hacker News

Two weeks ago I announced Level to the world with an essay on Medium and a post on Product Hunt. By internet standards, this created the tiniest of blips. But for me, not really knowing what to expect, I was quite blown away by the response. Perhaps most gratifying was that people identified with the pain and frustration I had experienced trying to frame artwork, cared that I was trying to create a solution for this, and had opinions on how I was going about it. There is all sorts of feedback you can get before launching, but until you actually put something out there in the world, you are just not sure what the reaction will be and what you will learn.

Below are a few stats and observations from the first 14 days since launch, and some humble advice to anyone launching something new.

There was zero budget for launching Level, only the desire to get it in front of people who would be interested in seeing it. One of the ways Level is differentiated from other framing options is the way you preview and select your frame online. Damian and I set out out to build something dynamic, intuitive and even fun to use, and will not stop pushing on that frontier as Level evolves.

So for me, it was a no-brainer to focus the launch around a Product Hunt post. Right now this is the community that most appreciates anything thoughtful, innovative and a little unexpected. If you haven’t yet spent any time here, you should check it out. It’s become a daily habit to check the Top Hunts and discover new products and projects across the web. There is also an unbelievably strong community here. Ryan wrote about how they built it up slowly and intentionally, a great primer for anyone building a community on or offline.

What's great about Product Hunt is the two-way interaction. You make the initial post, and the PH team can provide an "M" badge next to your name to let people know that the founder or creator is there to answer questions.

Erik from Product Hunt kicked things off by asking a great question about how we were planning to market Level. From there, a bunch of people jumped in with more questions and feedback. It was a rush to converse with and get feedback from people who were seeing Level for the first time. You can read all of the comments here.

Product Hunt has a leaderboard mechanic that sends more popular and engaging posts towards the top. You rise based on the number of upvotes you receive as well as the amount of interaction that happens in the comments. Posts that are higher up will naturally get more attention and clicks, and if you crack the top five by end of day you will appear in the Top Hunts email that goes out to a wide and growing audience the following day -- that's a big prize and drove a lot of traffic the day after launch.

Here are some thoughts on making the most out of a post on Product Hunt: 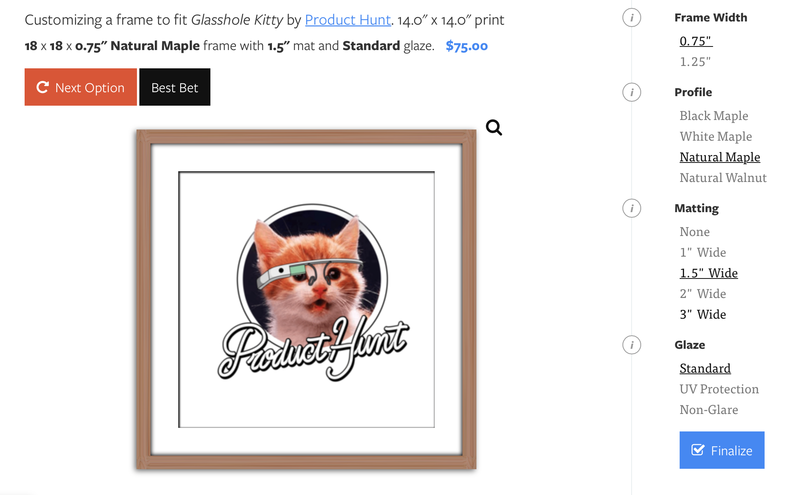 Product Hunt came in at #2 with almost 30% of all traffic. There was actually an increase in PH visits the day after launch, which I attribute to making the Top 5 and getting into the newsletter.

10/30 update:
Product Hunt is still driving about 10% of overall traffic to Levelframes.com on a daily basis. There are clearly longer-term benefits of being Hunted that kick in beyond the initial posting.

The biggest source of traffic to Levelframes.com was the essay on Medium. Over 20k people read it over the first few days, generating lots of recommendations and comments. Medium does a really nice job with their stats dashboard. I wasn't even aware of it until I crossed 50 recommendations and they emailed me a link to this:

And then @medium Tweeted the essay to almost 1M followers which felt pretty good. I almost spun up more Heroku dynos in anticipation of the traffic, but this one didn't move the needle that much. Still -- thanks, Medium! It's a terrific platform for writing, and they've built in really nice avenues to reach lots of people though social sharing and the recommendations.

But the way most people found the Medium essay has to have been Hacker News. I have to admit that when I first posted the link there, I wasn't expecting much and forgot to check on it for a few hours. When I finally did look for it, it was at #4 and had accumulated over 70 comments. I think there are over 100 now. This is some of the best feedback I got all day, we are still sifting through it.

People Cared, but Would They Buy?

As it turns out, the answer was yes. I didn't have any expectations for this either, but we are about to cross $10k in revenue for the first two weeks and are shipping frames to customers every day with an average order size over $130. We have a long ways to go, but to me this is a signal that we are on the right track in offering something that people want.

Here is the breakdown of sales by source:

Unless you are Apple or have a significant budget, the odds of creating some type of theater or massive hype around your launch are pretty low nowadays. There is just so much out there competing for attention. That doesn't mean you should just write a press release and call it a day. I was pleased to learn that it's possible to reach an audience in a meaningful way without spending money or resorting to stunts.

Here are my takeaways for anyone looking to introduce something new to the world:

The sum total of this advice is that the best thing to aim for is creating a conversation. That's the only thing that matters. Product Hunt, Medium and Hacker News are three great examples of sites where this can take place.

Also note that the attention and conversation will inevitably die down after the initial launch surge. The task becomes to carefully study what people responded to and what they cared about, and set yourself up to carry on the conversation going forward and grow the number of people who want to participate.

Lastly, huge thanks to the Product Hunt team, Medium, everyone who's provided feedback so far (positive or negative), and those who trusted Level to display their artwork by purchasing a frame.

If you found this useful or have any thoughts/questions, I would love to hear from you at @jhubball or josh@levleframes.com.