Custom Framing is a Racket

Why I took on building a better way to frame any poster, print or photo

The other night and out of nowhere, a song started taking shape in my head. It began as a spontaneous little guitar riff, but then started evolving into something bigger. Providing a little of my attention seemed to nourish it. A bass line, choral voices and interweaving melodies appeared. It continued building and building until it reached this amazing crescendo. For a minute or so, I was completely transfixed.

Even if I could have held that tune in my head for more than a minute, translating it from idea to reality is a completely different story. Had I attempted to create a recording somehow or put any of it to piano or guitar, I would have literally been able to capture 0.00% of the song as it played in my mind. I just don’t have the tools, experience or ability, and suppose what makes a great musician or songwriter is being able to turn the music they imagine into something others can experience with a high degree of fidelity to the original idea.

Here is another idea that popped into my head about five months ago.

While decluttering our apartment I once again confronted my small collection of posters and art prints still rolled up in their original shipping tubes. A handful came from Fab.com, there was a Ray Lamontagne concert poster I picked up after a show, and several others I had purchased on and offline. Not one had cost over $40. 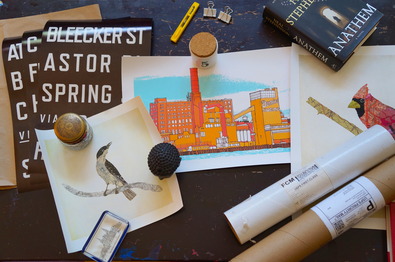 But the handful of times I attempted to get them framed and up on the wall, I struck out completely. The frames I came across in stores were either cheap looking or the wrong size, and the custom frame shops were quoting me 10x the cost of the art itself for a simple, gallery-style frame and mat. I knew exactly how I wanted to frame these prints and where they would hang on the wall — why was it so hard and expensive to get this done?

So what jolted into my mind at that moment was an end-to-end experience around framing my artwork online. I envisioned entering the dimensions of each print on my laptop or iPad, seeing them appear on screen, and then scrolling or swiping across different frame styles and mats until I found just the right combination. There was a single button that would suggest the best configuration based on the size of my print or the colors in the art. After a few clicks or taps to purchase, a frame would be handcrafted to fit my artwork and on its way to my front door.

No searching in stores or waiting weeks, the same quality and appearance of a custom-made frame, delivered to my door at a much better price.

Unlike that song in my head which will forever elude capture, I can bring this idea to life and make it real. An easier way to frame and hang art is something I’ve desperately wanted to exist, and over the last dozen or so years I’ve built up the right experience and set of skills to make it happen.

But more importantly, after seeing this in my mind and really starting to think about it, I couldn’t stop thinking about it. And just like that song, the more attention and space I gave the idea, the more it blossomed and took on new life and possibilities. I filled up notebook after notebook sketching designs, and mocked up the entire service in Keynote several times over.

Talking to almost everyone I know (and more than a few strangers) about their own framing experiences, it was pretty clear to me that I was not alone in wanting something new and better to exist.

So I decided to build it.

From Zero to Two (frames on my wall)

I had the general flow of a website and the framing interface worked out, but I needed help turning everything into working code. I reached out to a number of small software shops and individual developers, but at the top of my wish list was someone whose work I greatly admired and whom I had already gotten to know a bit. The insanely talented Damian Sowers agreed to take on the project, with the approach of starting on the first screen you would see when landing on the site and building up from there.

We approached it a bit like a science project — an outline to guide us, but figuring out the best way to solve each individual problem as it came up. The exact mechanism for entering artwork dimensions, dynamically rendering the different frame styles and mats, where to place the controls, zooming in to see the grain of the wood, how to recommend a “best bet” option, reducing the number of steps in the overall process, and so on. We discarded what didn’t work or wasn’t intuitive enough for the users we tested with. 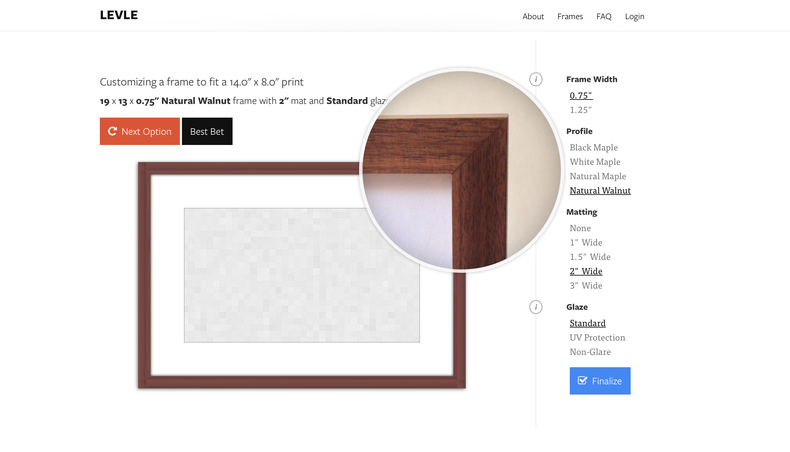 In parallel, I started spending hours in custom frame shops and talking with frame manufacturers up and down the East Coast. This led me to a wholesale custom framer here in New York with 30+ years of experience in the trade. Because he is set up for volume, has no retail overhead, and would not need to handle the artwork in this direct model, I realized that I could bring prices down to perhaps half of what the custom frame shop might charge while still using the same or even better materials. 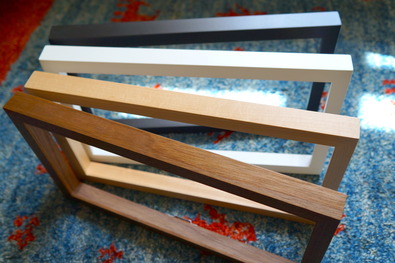 For the wooden frames themselves, I learned that I could further bring down prices by sourcing the moulding directly. This provides the added benefit of being able to specify the type of wood and where it comes from, the shape of the profile, and the various finish options.

In bringing everything to life, the software and hardware had to work together in delivering on a number of key things:

Fast forward to about month ago. After pulling together enough of the framing operation and bringing the site up to an unpolished but working prototype, I was finally able to test out the end-to-end experience on the problem I originally started with.

Below are the first two things I framed for myself. The idea was becoming real and picking up steam. 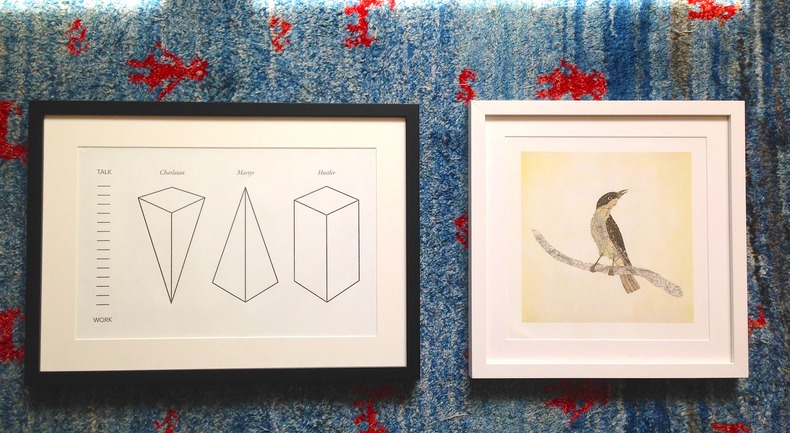 Today, after almost four months of crafting the experience on the site and working out all of the moving parts, Levle is up and running. Ready to take orders and ship frames for the artwork you’ve been hoping to display.

Give it a try now: https://www.levleframes.com/

It’s not 100% what I saw so vividly that afternoon, but it’s pretty close. It’s also taken on a life of its own, incorporating new ideas and learnings that have come from actually developing the site and making frames these past few months, as well as the generous feedback from so many friends and family.

So if you’ve purchased any artwork that is still trapped in the shipping tube or collecting dust somewhere, I’d be honored if you were to trust Levle to finally get it up on your wall where it belongs.

And whether or not you frame something today, I would love to hear any questions or thoughts on the site, why you would or would not use Levle for framing, how it could be better, or even just stories of your own personal framing experiences.

Finally, huge thanks to everyone who supported me and this mission from the early days. This is just the beginning, and Levle will continue to evolve as guided by the idea that it shouldn’t be too hard or expensive to surround ourselves with more art.

Keep an eye on Levle via Facebook & Twitter. I’ll write more on the experiences of building the company at @jhubball and here on this blog.