I loved college basketball during the 90's. In-conference rivalries were real and bitter, and the best players typically stayed in school for three if not the full four years. I loved the Big East in particular. Tradition, legendary coaches, and a legitimate star player on nearly every team.

But the team that excited me most was out West: UNLV during the peak of the Jerry Tarkanian era.

The 1990-'91 team was a force. The trio of Larry Johnson, Stacey Augmon and Greg Anderson (all NBA lottery picks later in the year) was rounded out by George Ackles, Elmore Spencer, Anderson Hunt and H Waldman. Anderson Hunt was my guy for some reason. He was a 3-point assassin off the bench with the coolest of demeanors and a knack for huge, backbreaking shots. And H Waldman - his first name was H! No period, Just "H." Coach Tark would be on the bench chewing a towel, just gnawing away on it the entire game. 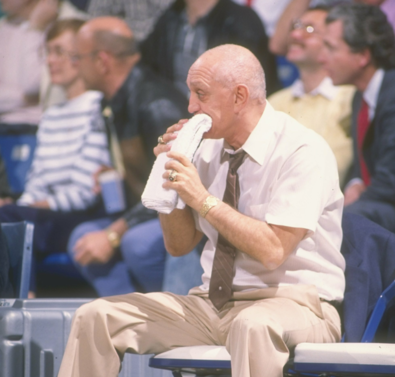 The Runnin' Rebels were overflowing with talent, style and personality. They ripped off a 27-0 regular season and entered the tourney as the #1 overall seed. My neighbor put together an NCAA pool; all 64 schools were written down on separate note cards in a box, and you paid $2 to reach in blindly and fish one out. I pulled out the UNLV card and was already counting my $128.

Unfortunately, the Rebs were upset in the quarterfinals by Duke (whom they had beaten in the 1990 title game). To this day, it gives me great pleasure to see the Blue Devils lose.

Some of the players on that roster went on to do well in the NBA, most notably Larry Johnson. He was the number one overall pick and rookie of the year after his first season in Charlotte. And sort of unexpectedly, he exploded into pop culture, propelled by one of the best sports ad campaigns ever. The series of :30 spots featured LJ in a wig and dress as "Grand-ma-ma", throwing down monster dunks thanks to the new Converse React sneakers. Here is the first Grandmama spot if you are not familiar.

I loved these ads. My friends and I would quote Grandmama during pick-up games all the time. "Stay outta the lane when Granny's driving." I had always been a Nike guy, but bought a pair of Converse Reacts that I wore until I outgrew them. Look how magnificent they are. 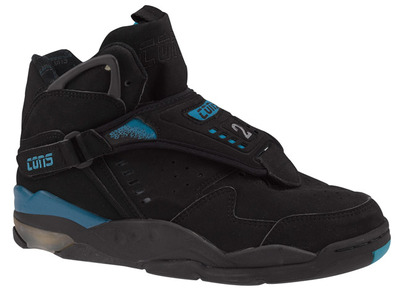 I had not thought of any of this for years until last night I came across Larry Johnson on TV telling the following story. You see, Larry was a Nike guy, too. All the Runnin' Rebs were. Coming out of school, LJ was the Wooden Award winner, Naismith Player of the Year and consensus number one pick in the draft. Of course top dog Nike was going to sign him to a huge endorsement deal. But the famous Nike rep Sonny Vaccaro, who had signed Michael Jordan to his first sneaker deal, came to Larry and told him Nike didn't believe he would be successful in the pros and had decided to pass.

At that point, lowly Converse sensed an opportunity. They had nowhere near the cache of a Nike, let alone a Reebok or Adidas, but their pitch included an amazing concept for a commercial. No, not Grandmama:

A body is lying on a gurney and covered by a sheet, Frankenstein style. Two scientists are working over the body, operating on it. The first scientist exclaims "Ah, the perfect basketball player." Pull back to reveal the two scientists as Larry Bird and Magic Johnson.

The figure on the gurney rises up, the sheet falling off to reveal Larry Johnson.

When LJ heard this idea he agreed to a deal on the spot, signing for $1 million that quickly turned into a new house for his mother.

Fast forward four months. Converse says they've decided to abandon the Bird-Magic ad, and want to run with a new concept in which Larry dresses up in a granny dress, wig and pearls. Without knowing how these spots would turn out, you can imagine his reaction and fear of total embarrassment. My first national ad, and I'm dressing up like an old lady? He would have ripped up the deal then and there, but he couldn't give back the money already spent and so the spot went into production.

This ad which almost didn't happen has led to an interesting legacy. After a long and very accomplished playing career, "Grandmama" is still the first thing a lot of people think of when Larry Johnson comes to mind. I know I do.

Here is LJ himself telling the tale.